Do you remember the Robotic Spider Dress by Netherlands-based fashion designer Anouk Wipprecht? Yes, the black outfit that was equipped with six robotic limbs which rests on the wearer’s shoulders and protects their personal space. Well, the tech designer is back with the updated version of the creepy dress. Called Spider Dress 2.0, Wipprecht has taken the help of 3D printing to create this unique piece of wearable technology. Giving an impression of an outfit from a sci-fi movie, the mechatronic dress is packed with 3D printed proximity and respiration sensors which responds to external stimuli and offers protection to the personal space of a wearer.

According to the designer, the Spider Dress offers an extension to the wearer’s intuition that define and protect his/her personal space using proximity and respiratory sensors. It monitors the rise in heartbeat and stress levels and record the brain activity at its highest. Thus, when a person approaches the wearer in an aggressive manner, the robotic limbs rises high to an attacking position. And if a person approaches the wearer in a friendly way, the dress will display a smooth gesture.

The Intel’s Edison chip enabled 3D fabricated spider dress acts as an interface between the wearer and the external world. Spider Dress 2.0 by Anouk Wipprecht will be showcased during the 2015 Consumer Electronics Show in Las Vegas. 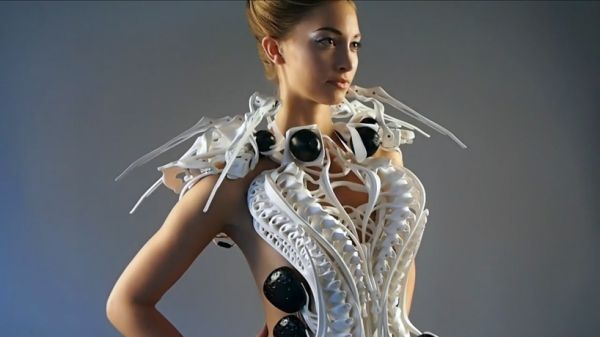