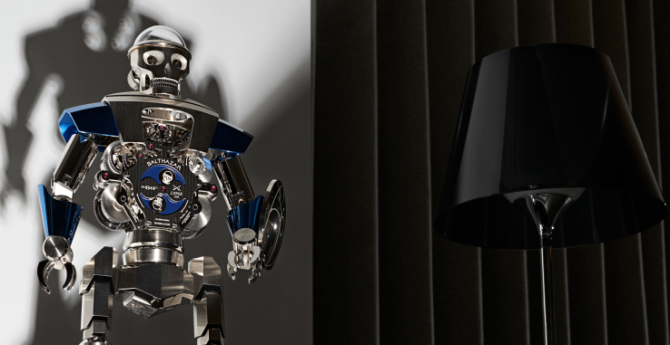 In collaboration with L’Epée 1839, a traditional Swiss clock maker, Swiss watch brand MB&F has created another robot-shaped clock called Balthazar. The high-precision robot clock has a dual personality, which is reflected through a smiling face on one side, and a grimacing skull on the other.

Balthazar’s cheerful eyes and smile act as 20-second retrograde seconds counters. However, to reveal its dark side, you have to twist the robot at its waist. On twisting the robot, its grinning face turns into a skull with the eyes that reminds us of the Terminator. In addition to swiveling at the waist, the shoulders and elbows are opposable, and its claw-shaped hands are able to grasp objects like regular robots. 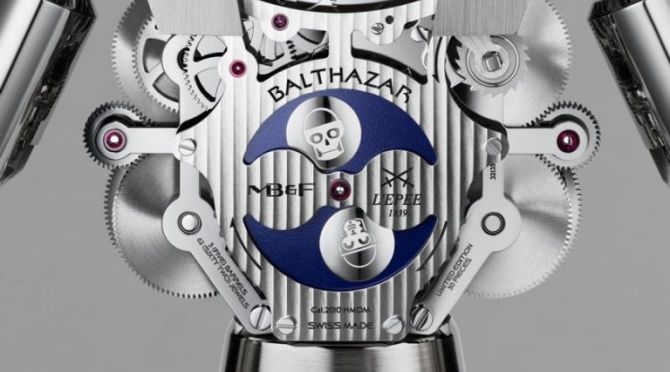 Made out of nickel-plated bronze with brushed and sandblasted finishes, the robot consists of nearly 618 components. On the other hand, the clockwork is made of palladium-plated brass and stainless steel. There are jump-hour and continuous minute discs on its chest, along with a small power reserve dial below the discs. The movement is a “Cal. 2010 HMDM”.On the robot’s stomach, you can see a dual-hemisphere moon phase indicator, with each of the two faces occupying one of the moons. 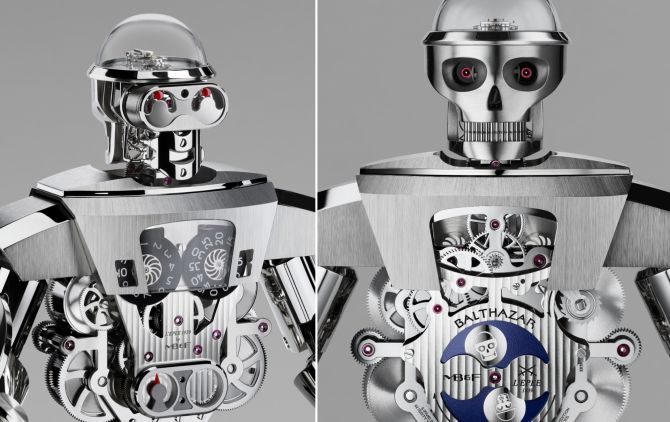 The robot clock stands 40 cm tall and weighs 18 lbs. It is powered by five barrels that combine to get you 35 days of energy on one winding. The shield mounted on one of its arms doubles as the winding key, so there’s no chance of misplacing the key.

Available in black, silver, blue or green armor, the MB&F Balthazar is limited to just 50 pieces per color. Joining the Arachnophobia in the MB&F robotic family, Balthazar is priced at whopping $52,875. For more information, visit MB&F website.