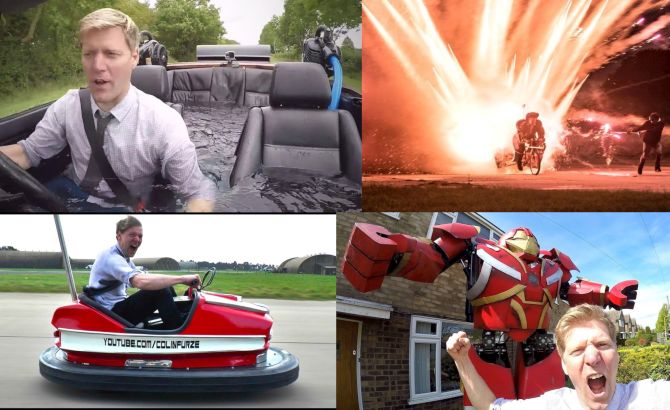 Colin Furze, British inventor known for his unconventional contraptions recently reached 10 million subscribers on YouTube. As fans of his work, we thought of doing something to celebrate this milestone. So, today we are bringing to you some of his crazy inventions that have made him a celebrity on YouTube. Colin have created numerous projects like the homemade Hoverboard and the Thermite launcher. From his collection, we have picked few of our favorites which we are showing you here today. So, sit back and get ready for a wild ride.

One of his latest creations, the highcycle is a 6 feet high bicycle that is much needed during this time amid coronavirus pandemic. As social distancing is very important, this bike will keep you at a safe distance of 2m (vertically) from others. Checkout, the video and see how easily Furze rides this bike. At the end of the video, he’ll also show a 4.5 meter high bike which he made 6 years ago.

It is surely one of the craziest creations ever seen by us. For this, Colin transformed a BMW E30 325i into a driving whirlpool. This rolling BMW Jacuzzi was built by Colin Furze in just four weeks. Check the video where he takes this SPA car for a spin.

In 2017, Furze customized a 1960s dodgem into the world’s fastest bumper car to create a new Guinness World Record. He was challenged by BBC’s motoring TV show Top Gear and see what he comes up with. The bumper car is powered by a 600cc Honda motorbike engine and it took the engineer three weeks to built it.

This 3.2 meter monster was made by Furze in 2018. Former toy designer and YouTuber James Bruton worked on this project with Furze. One arm of the Hulkbuster acts as a flamethrower whereas the other one houses a power-fist. eBay worked with Colin Furze on this project and all the hydraulic components and parts have all been sourced from their site.

If you have sweaty palms and are afraid of heights, this one will might scare you. The homemade 360-degree swing will take you 9.5 meters above the ground. The only safety is your own hands and feet. See how Furze enjoys swinging on this huge machine without any harness and straps.

To launch 1000 rockets from a bike while riding it seems the most dangerous idea, but for Furze it’s just another day at work. He created a custom bike with a long rack to hold the rockets for pulling off this stunt. The only safety was a piece of foam attached to his body. Have a look at this stunning firecrackers show in the video below.

This futuristic vehicle from Star Wars was created a while back by Colin Furze. The Landspeeder is built in partnership with eBay UK. Furze creation is based on Luke Skywalker’s X-34 Landspeeder from ‘A New Hope’ the 1977 American epic space opera. The chassis is formed from a Golf Buggy which he purchased from eBay. The Stars Wars Landspeeder is electric powered and for some extra power, Furze has attached two Diesel Jet engines to each side.